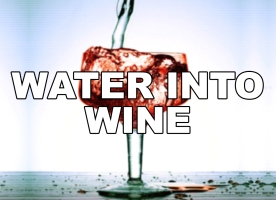 2 On the third day there was a wedding at Cana in Galilee, and the mother of Jesus was there. 2 Jesus also was invited to the wedding with his disciples. 3 When the wine ran out, the mother of Jesus said to him, “They have no wine.” 4 And Jesus said to her, “Woman, what does this have to do with me? My hour has not yet come.” 5 His mother said to the servants, “Do whatever he tells you.”

6 Now there were six stone water jars there for the Jewish rites of purification, each holding twenty or thirty gallons. 7 Jesus said to the servants, “Fill the jars with water.” And they filled them up to the brim. 8 And he said to them, “Now draw some out and take it to the master of the feast.” So they took it. 9 When the master of the feast tasted the water now become wine, and did not know where it came from (though the servants who had drawn the water knew), the master of the feast called the bridegroom 10 and said to him, “Everyone serves the good wine first, and when people have drunk freely, then the poor wine. But you have kept the good wine until now.” 11 This, the first of his signs, Jesus did at Cana in Galilee, and manifested his glory. And his disciples believed in him.

This is the first of the many miracles that Jesus performed. It was a seemingly simple miracle, yet it had profound implications. In the book of John, there are eight miracles of Jesus mentioned. Jesus performed many more miracles, but eight are listed in the book of John. When we look at these miracles, we notice something…they are simple and for a singular purpose.

Weddings were a BIG deal, and they would celebrate for a week. Wine was the most common drink, since they did not have refrigeration or preservatives. So, most drinks fermented, and it was even much safer than drinking the water. The wedding celebration had not ended, but they had run out of wine. A big no-no! So, Jesus began his public ministry. He met a need. He turned water into wine.

Why did Jesus do this? He is God. He is in control of nature and the entire universe. He did it to show His glory (vs. 11). This first miracle wasn’t simple…it was the beauty of the simple Savior meeting man on the simplest level of his life and supplying his simplest need, and He does the same to this day.

-Share some of the ways that God has provided your needs over the years.

-How does this remind you that God cares for you?

-What’s an area that you need to trust God’s provision in right now?

Father, Son, and Holy Spirit, thank you for caring. Thank you for caring for me, my family, and my every need. Use me this day and this week to radiate your glory in every thought, conversation, and action. Be glorified!